We have set aside a section of our website to honor our World War II veterans. These men and women faced incredible danger and hardship, with many paying the ultimate price for freedom. They are the true heros of our country and the world.  If you have a veterans story, please contact us for further details. 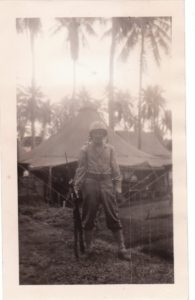 Dennis came into the 1st Marines as a replacement after Peleliu where the 1st Marines took heavy casualties. He landed on Okinawa in the second wave on April Fools Day, 1945 as a 17 year old green recruit.

The first 3 days were spent moving across the island to seal off the north end. Dennis said the only thing he shot was a chicken, which he ended up cooking in his helmet! The 1st. Division was held in reserve for the next couple of weeks, moving north and setting up patrols. They could hear the heavy fighting going on in the south end of the island and knew it was only a matter of time before they were in it. The last week in April, they were loaded onto trucks and headed south. They were dropped off at the Machinato airfield north of Naha to relieve the 27th Inf. Division. They moved out on the 2nd of May with a big offensive push by the rest of the forces. While they were crossing a valley with a small river on the southern end of the airport, elements of the Japanese 62 Infantry Division were waiting for them. The opening barrage was heavy with small artillery, mortars, and machine guns. They took heavy casualties and sought cover in the rocks at he base of the hill. They had to maneuver around to outflank the dug in Japanese, and while crawling up a small ridge Dennis reached out for another rock to grab and came back with a severed hand. After 2 days of intense combat the shooting quieted down. They found out later that their platoon had lost all of its officers and noncoms, the majority of them killed. Of the 62 men in his platoon, only 16 came out of their first engagement. Dennis said that was the worst time he had on Okinawa.

Dennis had a buddy in the 29th Marines that was fighting in the next sector south of Naha and decided to try and find him for a visit. With the consent of his NCO and armed with only a 45cal. pistol, he went on a hike and eventually found him. He spent the day in the front lines on an attack with the 29th Marines before going back to his outfit! 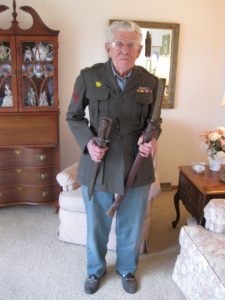 The 1st then moved into Wana Ridge with constant fighting along the way. The Japanese were hidden in caves and slit trenches all along the way and had to be dealt with one at a time. Grenades, satchel charges and flame throwers were the only way to deal with them. The men were grouped 2 men to a fox hole so one could sleep while the other was on watch. One night stood out for Dennis when the Japanese were infiltrating their lines at night. The flares were constant and they shot at anything that moved. Dennis woke up to find his foxhole partner had been killed.

They were advancing in an area that was flat and wide open in the Wana Draw area with 3 Sherman tanks. One by one the Shermans were all hit by anti tank guns and he remembers watching the crews bail out. After the attack on Wana Ridge they came off the line on May 15 and were issued new uniforms.

Shuri castle was the next test, and this is where Dennis picked up the sword off of a dead Japanese NCO officer. He had a buddy in the supply system that kept it for him along with the bayonet. Fighting was constant and casualties were high. Dennis recalls seeing a marine running to the rear trying to hold his entrails from falling on the ground as he ran. There were so many unburied bodies (mostly Japanese) that the stench was unbearable. The bloated bodies were bulldozed into mass graves or burned.

Heavy rain and mud was the constant weather to deal with during the later stages of the fighting. They were finally pulled off the line on June 15. After a brief resting period they were trucked to the north end of Okinawa for refitting and replacements in anticipation for the invasion of Japan. After the atomic bombs were dropped and the war was over, they were shipped to China.
Dennis passed away on June 25, 2016 at the age of 90.